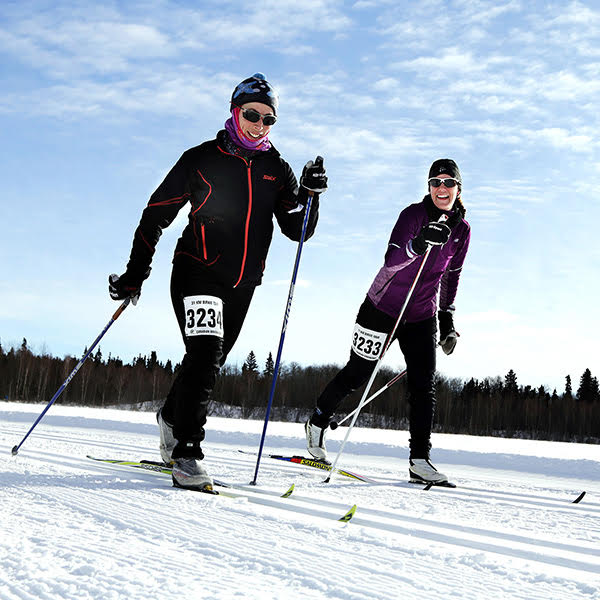 My introduction to the sport of cross country skiing came a few years ago through a friend’s invitation to an annual spring event at the Strathcona Wilderness Centre called the “Pastry Ski.”  My friend said we’d  ski a little, eat a little. This sounded like a pretty good trade off to me.  In spite of some frustration and a near collision with a small child as I tried to navigate myself downhill, I survived my first cross country ski experience. And yes, I did get to eat some pastry along the way.

Later that year, I was persuaded by the same friend to sign up for the “Birkie,” otherwise known as the Birkebeiner.  I had never heard of the Birkebeiner before, but I was told it would be fun  . . . just like the pastry ski.  Granted, the distance was a little longer but we would get through it by taking several breaks at the check/food stations along the way.

Since we had never taken any formal lessons, we decided it would be a good idea to take some basic lessons offered through the City of Edmonton.  With a few lessons behind me, I felt I was ‘ready’ come the second weekend of February to ski the 31-kilometre course at the Birkebeiner. Boy I was wrong.  Although we stopped at each of the check-points along the way, our stays there were brief, mainly because the competitiveness of my friend (something I was completely unaware and unprepared for) had kicked in.

At one point during the ski, she told me we should try and stay ahead of the ‘sweeper’.  “The sweeper?” I said, “What in the world is a sweeper?”  She explained that if you are unable to make it to the check-points by a certain time, someone comes and picks you up on a ski-doo.  For a minute this didn’t sound like such a bad idea.  But I continued onward, doing my best to keep up with my friend.  I had brief glimpses of her on the trail ahead of me during the first part of the course, but I ended up losing her altogether.  That’s something I still don’t let her forget.  After several wipeouts, which left me wondering whether the Birkie was really some sort of cruel joke, and after several hours of exhausting skiing, I finally found and crossed the finish line.  I had completed my first Birkie!

If someone had asked me at the time if I would be registering again for next year’s event, my answer would have been, “Not a chance!”  Even so, as the next ski season approached, I was once again persuaded—and, yes, by the same friend–to register for a Birkie-sponsored class called Learn to Loppet taught by a team of very experienced cross country ski instructors.  A loppet, by the way, is simply a fancy name for cross-country ski event.  During our six weeks of instruction, we were taught everything from technique and waxing to fitness and overall loppet preparation.  The classes and instructors were excellent, providing skills which were valuable and could prepare anyone for any loppet.  After six weeks of lessons, I found myself once again registered and finishing yet another Birkie.  This time, if someone had asked if I would be registering for the following year, my answer would have been, “Absolutely!”

. . . Okay, . . . here I am . . . , the friend mentioned in the above article . . . My only comment is that in spite of our adventures (or should I say misadventures?). . . Tammy and I are still friends!  I would like to encourage cross country enthusiasts of all levels to take lessons.  There is always something you can learn, some new technique or special that will enhance the pleasure of enjoying the beauty of nature and winter with other cross country skiers.  Tammy and I would like to thank the wonderful instructors we had in the Learn to Loppet program.  We would also like to express our hope that when we next pass each other on the ski trails we will be found gliding gracefully in the tracks instead of toppled over in the snowbanks!