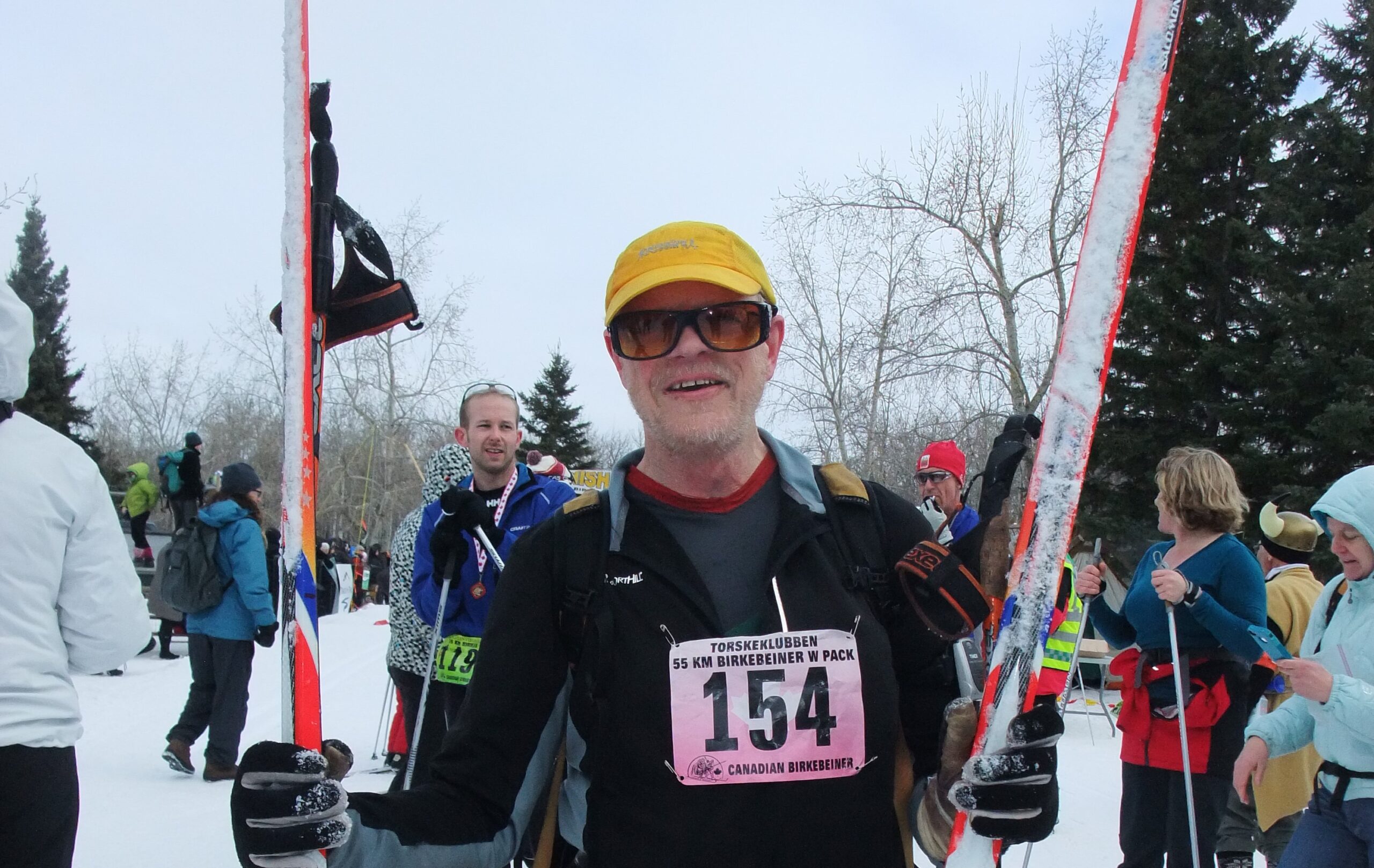 There may be more stories per skier about the Canadian Birkebeiner than Birkies skied.

Enthusiasm is Contagious.       Following the Birkie during the morning-after work break, I heard and vicariously imagined the misfortune or success of five colleagues as they shared their experiences.  Seeds of interest were sown in me from their banter.  One week prior to the eleventh Birkebeiner in 1996, to see if I could do it, I skied 57 km.  I registered in the last hour to cut-off.

First One.    Dressed appropriately for the weather, wearing my 5.5 kg backpack, I made my way to the start on Goose Lake.  Wearing old-style touring boots clamped into toe bindings on wooden skis, I pushed off on bamboo basket poles. Half-way along the 55 km Torskeklubben course, pack removed, I lay on top of a snow-covered picnic table to rest.  I was ready to earn my Birkebeiner finishers metal.  The camaraderie experienced during the 7 hours en route had me hooked.

Want a Story to Tell, Set a GOAL.       After skiing five consecutive Birkes and making some equipment upgrades – first track poles, then new binding and boots – I was able to finish subsequent events in 5 hours.  Further improvement required moving from the 20th to the 21st Century.  In 2001 I bought my first racing skis and set myself a goal to finish in 4½ hours.

Preparations.         To stay in-shape for the next Birkie I signed up for the now defunct RUNBIKESKI program (included the 55 km Birkie, a June 100-mile cycle and an August 42.2 km marathon run).  I added a North Boundary (Jasper area) trail hike of 180 km over eight days.  In training I skied 560 km.  Alas, the 2001 Birkie was cancelled!  Ha, now I had another year to train!  In 2002 I completed another RUNBIKESKI and hike, then added the Birkie Learn to Loppet Program.  In training I skied 930 km.

Ready to Race.      In 2002, snow was abundant, the set track fast, my physical conditioning and skiing technique improved, both weather conditions and my waxing proved good.  After reaching the first Food Station I was way ahead of my calculated time.  My thoughts entered the Technicolor realm, would it be possible to finish in 4¼ hours?  I finished in 4:05:12 hours and was ecstatic to have a new personal best (PB) having even bettered the 4:16:58 PB previous achieved by my red bibber colleague … ah, but there is more, as serendipitously, my fondest Birkie memory was about to be realized!

At 39 km a skier, who had followed me for a while, positioned himself to pass.  Good, I thought, I can take advantage of skiing behind him.  Beside me the skier glanced across and exclaimed, “Ken!”  Well, to both our considerable surprise it was my 4:16:58 colleague – his surprise was that I had been ahead; mine that he had been behind me!  We celebrated his new 3:59:24 PB and were both on top of the world, if not the podium!